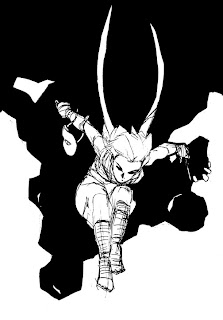 Her name is Tempest—and no, the moniker has nothing to do with Hurricane Sandy. The name, rather, is a nod to the storm that occurred the night she was kidnapped from her bedroom as a child. She’s a 13-year-old assassin, trained and raised by a covert organization that shaped her into a merciless killer. She’s also the character I created, with artist Eric Kim, for Shattered, the Secret Identities comics anthology that dropped November 6.
What goes into creating a comics character? This was new for me. My comics background didn’t go far beyond thumbing through Archie and Ranma ½, devouring Joe Sacco’s Safe Area Goražde and Palestine, or watching My Neighbor Totoro as a teen on acid. But I had to start somewhere. I re-read some Ranma, the beloved gender-swapping martial arts Japanese manga series, and Love and Rockets, by alt-comics pioneers Los Bros Hernandez, as well as Shortcomings and the Optic Nerve series by Adrian Tomine—who illustrated this week’s excellent Sandy and prez election-related cover art for The New Yorker.

The story began to unfold, along with Eric’s artwork. On the eve of her 13th birthday, Tempest is nearly the perfect assassin: a killer without ties to others, without even a sense of self. During a crucial battle, she kills her masked opponent. Once she discovers the face behind the mask, she realizes she has made a horrifying mistake and vows to never kill again. She escapes—as depicted in Eric’s early sketches. 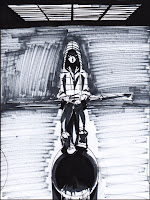 She is also a child, but a girl without memories. 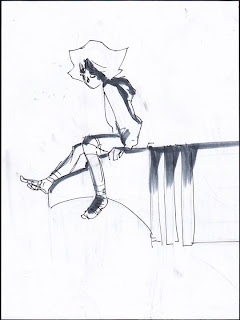 Like the assassin-for-hire in Wong Kar-Wai's Fallen Angels or the real-life hit man Vincent Smothers, Tempest, too, attempts to shed her violent roots. But her upbringing makes that virtually impossible because the organization that trained her had wiped out her memories and all ties to the past. 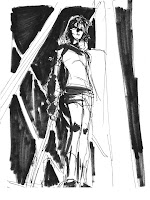 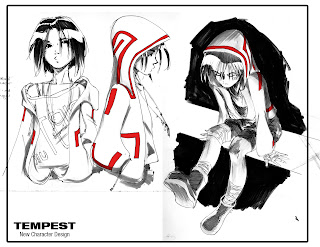 Pulling from influences that included Natalie Portman à la The Professional, manga series Path of the Assassin, and artwork by Koji Morimoto, Eric created this near-final sketch. Tempest is “much like the future, which is globalized, chaotic, and made up of so many disparate elements that come together in an individual,” he explained.

Eric and I went back and forth on Tempest’s weapon, mulling over a long list that included guns, machetes, twin batons, poison darts, crossbows, samurai swords, and ninja stars. I pored over images of Battle Angel Alita, a stunning cyborg that, as my friend Alex Chee explained, eventually absorbed weapons into her body to become her own signature weapon. We studied weapons used by The Mossad, Israel’s intelligence agency. Here’s a sketch of Tempest with various polearms (staffs with blades attached). 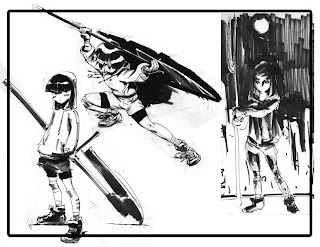 To see the final image of Tempest—and the weapon we chose—check out Shattered, the follow-up to the seminal Secret Identities: The Asian American Superhero Anthology. She’s also featured, along with several pieces by Shattered contributors, at a twin exhibit called "Monsters and Marvels" and "Alt.Comics" curated by Jeff Yang, Herb Tam, and Ryan Wong at the Museum of Chinese in America.

For the time being, Eric and I are working on a Tempest series. The first story involves shoplifting, ping pong, graffiti, a botched kidnapping attempt, and a barn own named Meat. Stay tuned.


Kai Ma is the editor of Open City magazine and managing editor at the Asian American Writers’ Workshop.
Posted by keith chow at 2:41 PM

Promote Your Page Too

Promote Your Page Too